The Bad Habits were a locally-based Manchester band performing in the mid-1980s. The alternative scene in Manchester was beginning to take off at around this time after Factory records and the Hacienda had been set up.  Bands like the Fall were influential but only a few women musicians were involved. We were one of only two or three women’s bands in Manchester at this time.

Most of us had had previous experience in other bands – Angie, Luchia and Jenny in the Northern Women’s Liberation Rock Band (NWLRB), Janet in a band with her sisters, and Una as keyboard player with the Blue Orchids.  Although like the NWLRB we played rock and blues as well as reggae, we wrote more of our own material and developed a distinctive sound.  Our material reflected the concerns of the women’s movement at this time. As well as feminist songs like the Chicago Women’s Rock Band’s ‘Ain’t Gonna Marry’, we wrote and performed a song about the ‘Greenham Common Women’. Another one was ‘Big Strong Woman’ adapted from an Irish folk song ‘I Have Dreamed on This Mountain’ – this was around the time of the hunger strikes in Ireland and there was a strong Women and Ireland group in Manchester supporting women imprisoned in Armagh jail. There were also love songs like the uplifting ‘No Romance’ (Baines) and the poignant ‘You Were There’ (Cooper/Clegg) aimed to capture the reality of relationships as opposed to the saccharine fantasy of mainstream songs – and we thought of these songs as just as political as our other numbers.

The Bad Habits recorded four songs at a local studio – the lyrics of three of them are included below; the fourth was ‘Ain’t Gonna Marry’.  Later some of us went on to form other women’s bands such as ‘Five Famous Women,’ (with Kim, vocals; Carol, vocals and guitar; Sara, bass; Sue, drums) which played at the Stop Clause 28 event in Manchester in February 1988 at the Free Trades Hall social after the huge national march, which Angie helped to organise. Kim, Jenny, Carol, Sara and Sue went on to form the Moody Pinks with Brenda and Maggie joining on saxophones.

From a review in The Hulme Octopus, Issue 3:

“Getting Into Bad Habits …

….their commitment to women’s issues comes across right from the start. Their opening song ‘Ain’t Gonna Marry’ leaves no-one in any doubt as to their allegiance, and this mood of self-determination is continued through the lilting ‘Why Can’t We Be Together (?) and the assertive ‘Give My All For the Real Thing’. They demand all the integrity in relationships we could ask for, and the up-beat delivery saves it all from being heavy … Their song on Greenham was enthusiastically received, as was the strong and beautiful standard, ‘I Have Dreamed On This Mountain’.  It was obvious the enjoyment the group got out of performing.  What a change to see a band laughing and smiling their way through a set.  Especially I liked Angela’s powerful lead vocals and Janet’s work on bass guitar.  The delivery, I mush admit I found a little samey after a while.  On this point though I think too often women’s music, which is trying to find a new form is often judged by predominantly male experiences and style and can’t get inaccurately reviewed.  All in all … a cheery competent gig …”

We came to Greenham

In the rain the wind and the cold

We came from far and near

Chorus: And we all say no

We made a circle round the base

Holding each others hands

The message came out loud and clear

We’re here to make a stand

We don’t want missiles on this land

We’ll fight you anyway we can

We’re not afraid of your prisons

We claimed your fences we blocked your gate

You tried to evict us

You can fight but we will win

You can’t kill the spirit it goes on and on…

I Have Dreamed on This Mountain

Not with me watching

This old mountain’s raised many daughters

Some died young, some still living

But if you’ve come for to take my mountain

Well we didn’t come here to give it up

You were there, unexpectedly so,

Your smiling eyes, we both said hello.

My new love was right by my side,

But I love you again, this moment in time

And we both know

The me and you that never died

She’s looking at you now and my love

Angela Cooper notes a ‘shift in lyric content’ from their 1970s predecessor, the Northern Women’s Liberation Rock Band, whose songs reflected the themes of the women’s movement – abortion, drug companies, male chauvinism – to the Bad Habits who, during the 1980s, included ‘more songs about love, relationships and woman power in a more non-specific way.’ The song list shows how the band put their set together, which involved the problem of trying to get a balance between slow and fast, familiar and original material. ‘We played classics like ‘Do You Wanna Dance?’ Tamla and soul numbers and the Staple Singers ‘I’ll Take You There.’ Our gigs were more local than the NWLRB, as part of the WLM, had been.’ 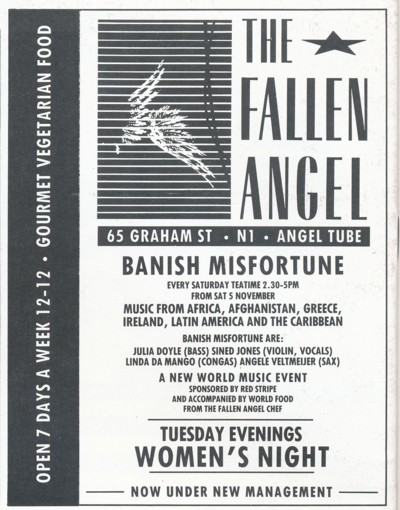 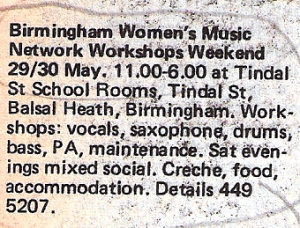 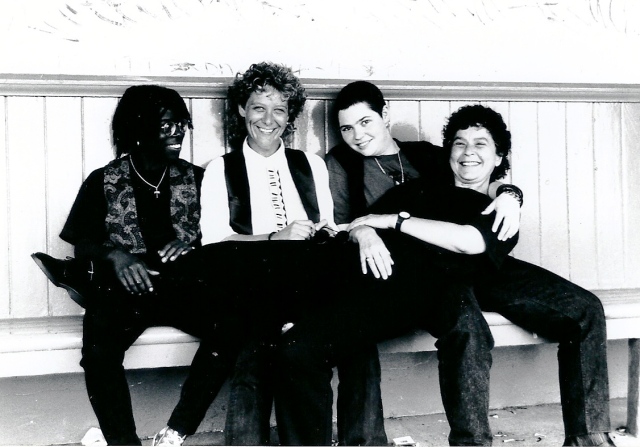 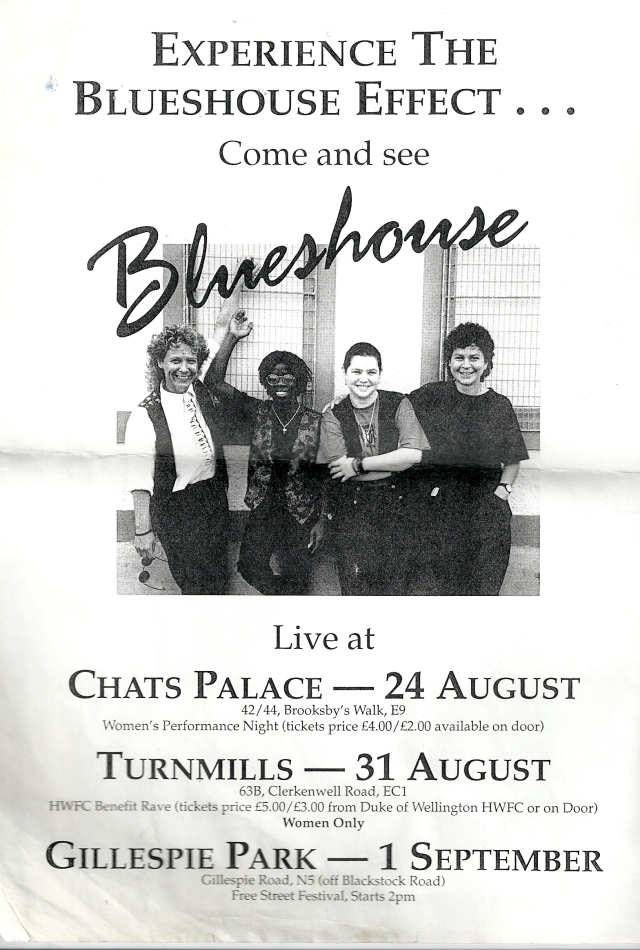 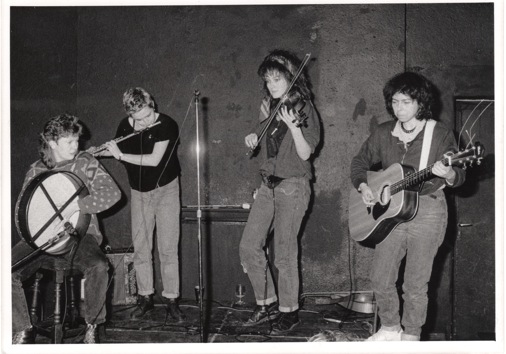 The Brazen Hussies were formed in Bradford at the height of the radical feminist Women’s Liberation Movement in the city. Di and Sheila were at university there, Val comes from Liverpool and Miranda is a Londoner. We started by getting together in each others’ flats and playing the current women’s songs and more general folk and blues songs we knew, just for ourselves. We enjoyed songs by Alix Dobkin, Cris Williamson, Peggy Seeger, and Greenham Women songs among others. We were taking part in many women’s events around West Yorkshire at the time, and started performing at some of these – conferences, fund-raisers, discos – we were the entertainment after the hard work! We wrote some of our own songs and performed covers as well. Many of our songs were sing-along ones and we always encouraged women to join in. 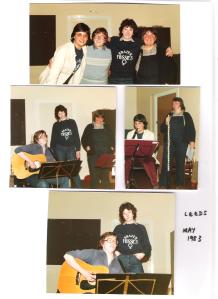 Bradford (upstairs at the Star) – February 1983

When searching out information for this site, we were struck by how little we had – it was all done by word of mouth, a touch cloak-and-dagger. The local women’s groups at the time were – a Women’s Centre campaign in Halifax, various attempts to start Women’s Centres in cities like Bradford and Huddersfield, self-defence training, editing our newsletter, Women Against Violence Against Women (WAVAW).  Our last gig was called ‘Mrs Big’s Bop’ at Bradford University – there had been reports in the media of ‘angry women’ attacking sex shops at the time. The authorities just couldn’t understand who was in charge. Someone official was heard to say ‘we need to find Mr Big’. Hence our bop as a send-up.

We’ve lost touch with Sheila so if you find this site, it would be great if you got in touch. Good times in hard years! 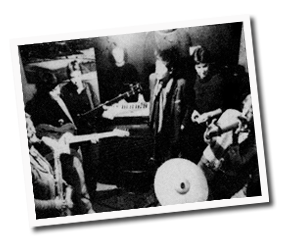 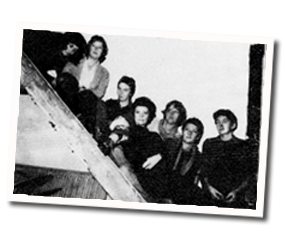 The song Hidden From History was featured on Vaultage 80. Music by Bright Girls. Recorded at Sound Sense, Seaford. Bright Girls mp3’s can be found on the punkbrighton jukebox More info on  http://www.punkbrighton.co.uk/vaultlpc.html

“Entertainment for lesbians took a turn for the better thanks to radical feminists. Devil’s Dykes was started in 1977 as an all-women, and nearly all-lesbian, band. They shared a vault under the old Resource Centre in North Road (where the Brighthelm now stands) with a punk band called The Parrots. In 1980 the band metamorphosed into the Bright Girls with an all-lesbian line-up, four of whom were also shortly to become members of the lesbian theatre company, Siren. Siren’s plays were hard-hitting critiques of women’s position in the world with strong lesbian themes. They frequently premiered at the Marlborough or the Nightingale pub theatres to rapturous audiences of local lesbians. The company toured extensively until 1990.” 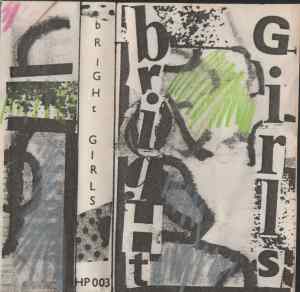 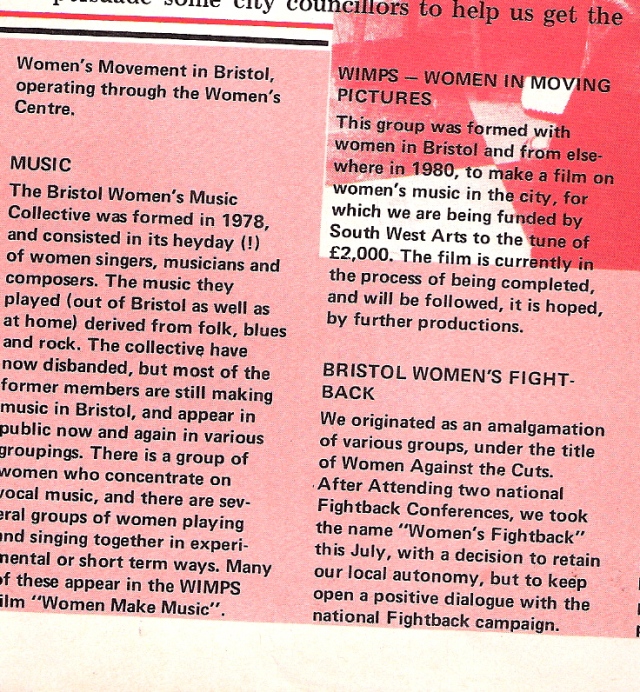 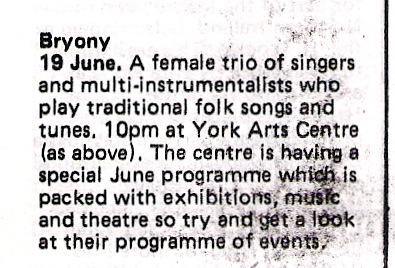 A Newcastle-based women’s band in 1982, whose gigs included playing on a couple of Reclaim the Night marches in Newcastle.