AYT used eclectic mayhem to build a bizarre music that is textural and rhythmic. Founded on themes and motifs ranging from gunslinger Annie Oakley to 70s TV heroine Emma Peel via Dadaist poetry and New York no-wave, AYT play musical chairs with instruments that include plastic guitars, old cornets, dustbin lids, accordions, a gu-cheng, a kazoo,
which buzz and whirl around a basis of drums, bass and synth or guitar, bumped up to psychedelic incoherence with echo and reverb.

Art school punk with a wry edge, scholarly, brash, and iconoclastic AYT took performance and cabaret and mixed it with sham-pop and post-punk in a collaborative process that produced surprisingly ‘popular’ theme tunes, performed with an anarchic sabotage of girl-band aesthetics and feminist politics. Eschewing the more conservative folk and rock of the womens music scene of the time, AYT made the rules on their own terms; throwaway,
performative and crazy, the magic was in the moment, an improvisational art-punk that celebrated lo-res hybridity and outlaw irreverence. ~ Jackie Freeman and Ruth Novaczek 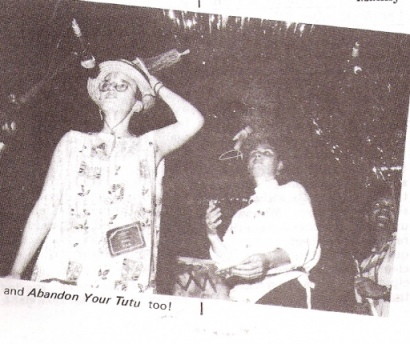 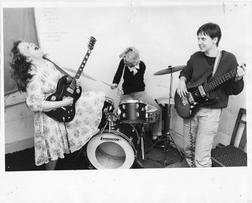 Amy and the Angels

‘I Hate Being in Love’ – Amy and the Angels

Ad for benefit for Labyris cars taxi service for women

Recordings: I Hate Being in Love on Making Waves LP (Girlfriend Records, 1981); Words fail me + interview, The English Programme, Thames Television, 1982; more bits and pieces on tapes, to be re-discovered… 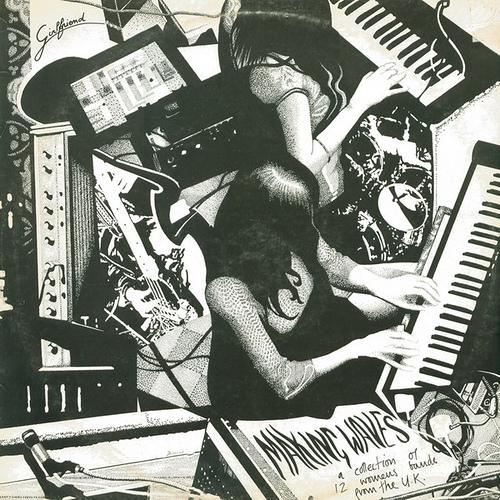 Back cover of the Making Waves album

Another review of the album. Source unknown.

Amy and the Angels + Abandon Your Tutu gig flyer

Amy and the Angels gig poster

Anarcho punk / post punk band based in London and formed in 1980 after the breakup of the band Here & Now.